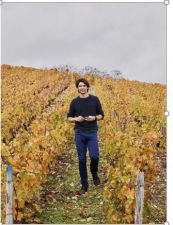 "We'd been joined by two young Sancerrois winemakers, Matthieu Delaporte and Luc Prieur, whose families have been in the region for generations. Even though Jacquet's wine list at Momento is extensive, Delaporte and Prieur came loaded with cuvées from their own wineries, and pretty soon we were a pretty lively party of four people and 15 or 16 bottles.

Later I asked Delaporte how long his family had been making wine. Since the 17th century, he replied. "We were one of the first domaines in Sancerre-Chavignol; where we're located is where everything started. At that time, they were making wine, raising animals, making cheese."

My favorite of Domaine Delaporte's wines, which we drank at lunch, is its Sancerre Les Monts Damnés - crystalline and powerful at once, it shows how complex Sauvignon Blanc can be in the right circumstances.

"Monts Damnés is kind of a grand cru of Sancerre, even though technically there are no crus here," Delaporte said. "It means 'the damned mountains,' because a hundred years ago you had to be absolutely damned to work that steep a slope. It's forty to fifty degrees! But it's worth it."

When his ancestors were picking grapes on the chalk inclines of Monts Damnés, did they know that the Sun King was building a stable for 1,200 horses only 70 miles away? Probably not. Distances were greater then. Did his grandfather, bottling wines in 1947 - a hundred bottles of which Delaporte recently found, in perfect condition, under his grandparents' house—know a Liberator bomber had crashed on the grounds of Chambord just a few years before? Quite possibly. Today, can I taste all those things when I open a bottle of his wine? Imaginatively, maybe.

Good wine tells stories. The right bottle can even let you travel in time. As Delaporte said about those 1947 bottles, "They taste amazing; I thought of my great-grandfather, making wine through both of the world wars." Until I can return to the Loire, I can open a bottle of one of Delaporte's wines and envision myself looking out over the rooftops of Bué into the late afternoon sun, laughing and talking with friends."